Since I’ve been back in the United States, many people have asked me what it’s like to live in Japan. I really should have a prepared answer, since I get the question so often, but how do you describe a country in just a few words? This post will be my attempt at a brief introduction for those who are interested.

It’s pretty amazing that a country the size of Japan is the third largest economy in the world. It has about 126 million people and is around 146,000 square miles in size. To put that into perspective, the United States has a population of 327 million and is 3.797 million square miles. Japan is also the third largest automobile manufacturing country.

The manufacturing industry in Japan is heavily oriented toward precision goods, which very nicely complements the Japanese culture or national character. By that, I mean they really pay attention to detail. I’ll touch on that later.

I was personally surprised to discover that despite the size of the Japanese economy, schools and homes do not have central heating and air. In the summer, it’s hot and humid all over Japan, but most Japanese people simply open their windows and turn on a fan. In the winter, Japanese people take a hot bath at night and sleep under thick blankets in bedrooms that feel like they’re subzero. The air conditioners that they do have are room specific, and the only source of heat is usually a kerosene heater or a kotatsu (a heated table with a blanket over it that you sit or lay under) in the living room.

The houses are not insulated much at all. In fact, I was once told by a (cynical?) Japanese person that the houses are intentionally built flimsily so that construction companies, which are usually family-owned, can ensure that the next generation will have jobs to work on. I think it’s also entirely possible that they have to be built that way in order to withstand the frequent earthquakes.

The interest rate at banks in Japan is unbelievably low. Like 0.01% low. That means you don’t get much interest on your savings, but it also means that mortgages are incredibly cheap. In fact, the mortgage I took out when I lived in Japan had an interest rate of 0.9%!

You can’t tell, but our shoes are off. (Not the meal or friends from the story.)

The Japanese culture is fascinating. In Western countries like the United States, the emphasis is on the individual. In Japan, however, the emphasis is on groups. Everything you do reflects on your group, positively or negatively. If you mess up, you shame your family or your company. Anyone who has been to Japan has heard the saying, “The nail that sticks out gets hammered down.” This also means, however, that groups are tightly knit.

A nice difference between the US and Japan is that in Japan, people take their shoes off when going inside homes or fancy restaurants. Sure, some American households take off shoes at the door, but the vast majority do not. Do you ever stop to consider that you’re tracking in nasty germs from public restrooms when you get home and walk through your house? So gross!

Incidentally, when I first went to Japan as an exchange student, I was unaware of this custom. The next day after I arrived, I went with two new friends who had already been in Japan for two months on a summer program to a ramen restaurant. (Note: This is not the store-bought noodles that we would typically refer to as “ramen” in the US but a gourmet soup of sorts). Being nice (or so they thought), they allowed me to go in first. Naturally, I stepped up onto the straw mat floor with my shoes on, much to the horror of the owner, who gasped. My friends apologized for me, and I was quite embarrassed when I looked back and saw the cubby full of customer shoes.

You can’t talk about Japanese culture without mentioning tea ceremony or “chado.” Japan Guide says, “(Chado) is a ceremonial way of preparing and drinking green tea typically in a traditional tearoom with tatami floor. Beyond just serving and receiving tea, one of the main purposes of the tea ceremony is for the guests to enjoy the hospitality of the host in an atmosphere distinct from the fast pace of everyday life.”

The protocol is meticulous and takes years of practice to master. Remember when I said earlier that the Japanese people really pay attention to detail? This is just one example of that that’s ingrained in their culture. I could also mention origami and how Japanese people love to make teeny, tiny things.

Worn less and less, the kimono nevertheless remains a symbol of Japanese culture. You might be surprised to learn that you can’t just put on a kimono.

It takes many years of practice to get the positioning of the collar, the belt (obi), and the sleeves just right and make sure there’s just the right amount of slack everywhere. Tying the obi is an art form in itself.

Here I am participating in a kimono contest for foreigners. (Fifth from left)

Today, even most Japanese people don’t know how to put a kimono on. They typically only wear them on just a few occasions during their lifetimes: on their third, fifth, seventh, and twentieth birthdays or on other special occasions such as weddings. Generally speaking, a professional kimono instructor will help them put the kimono on for these occasions and make sure everything’s perfect.

Didn’t get a picture of the employees bowing, but here’s my mom smiling.

Who doesn’t know about bowing in Japan? You may not know, however, that there are different levels. The deeper you bow, the more respect you are showing. The person of lower rank always bows deeper than the one of higher rank.

When my mom visited me in Japan, we went to a department store early one morning when it first opened. The entire staff was lined up on either side of the path and bowed deeply as we entered. She said it felt like we were royalty.

Another important thing to note is that when giving and receiving business cards in Japan, you always use two hands. It feels weird at first to use two hands to pass such a small piece of paper, but it’s a sign of respect. In fact, any time you give someone anything, you’re supposed to use two hands.

Consisting of three (or four) different writing systems and three different levels of politeness, Japanese is one of the most difficult languages to learn. The Japanese people did not have a writing system until trade began with China. So the Japanese adopted the Chinese writing system (kanji) and modified it for their own language. Hiragana and katakana are simplified versions of the Chinese characters and are used to spell out words in syllable form or to conjugate verbs. The kanji, or Chinese characters, are used for nouns and the root of verbs. Romaji, or English letters, are the debatable fourth system and are used mostly to help foreigners but can also be used to emphasize company names and such. 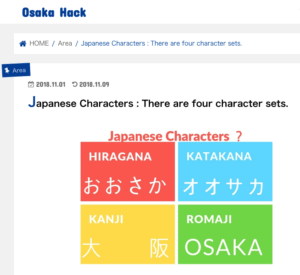 Here’s a quick lesson about Japanese writing from Osaka Hack.

Each hiragana and katakana character represents a syllable, while the kanji represents a whole word. In the pictured example, the first Chinese character means “big,” and the second means “slope.” Together, however, they mean “Osaka,” a city and prefecture in Japan.

As an aside, because Japanese is made up of syllables rather than vowels and consonants, it can be difficult for Japanese people to pronounce English words. For example, since every consonant has to be paired with a vowel, the word “practice” would come out as “poe-rah-koo-tea-soo” when sounded out in Japanese syllables.

Japanese people tend to be shy and to work hard. They’re also very kind to foreigners who visit, and they can be loyal, lifelong friends when you get to know them.

There are many things to do and see in Japan. My favorite place to take people is Kyoto. It’s the ancient capital of Japan, and yet it’s a bustling modern city as well. You can see the old right beside the new. I won’t go into all the places to see in this post. But here’s a blog to get you started.

Not sure if you can see it, but that’s a Starbucks inside a very old building in Kyoto.

I Work with Trados